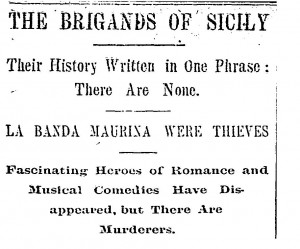 At the time of the historical transfer of power to the Left, right after the demise of the Bourbon kingdom – in a moment of particular importance for Sicily after the elections of 1874 – under the “trasformazionista” profile by Depretis, brigandage in Sicily, that was a major issue until then, had a setback with the start of the trial at the Assise Court of Palermo, the notorious and feared gang Maurina. On July 24 1878, ruling ordered some of the components of Maurina – Botindari Domenico, Nicolo Accorsi, Nicolò Zito, Giulio Turrisi, Filippone Martino, Vincenzo Ciraulo and Filippo Palermo – to the death penalty. The death of Victor Emmanuel II, who was succeeded by his son Umberto I, provided an opportunity for amnesty to all those who were on trial, among them also Maurists just condemned. The sentence was commuted to life sentences with hard labor. It closed so the brief period that saw an apparent calm down on areas known to be “hot” of the north east of Sicily.

One of the prominent personalities, including dynastic matters, is surely the Botindari. Even Uncle Dominic – wingman at the time of Rocca and Rinaldo, had talked about the breezy assumption that he could be the executor, and if not that, the principal of the death of Vincenzo Rocca. Botindari Giovanni, grandson, said in a public letter during the trial in the Assize Court in Palermo, this time in 1894, how his life had not taken the turn of banditry as a young man, but rather that they had been made but quite fortuitous “fatal” to change the course. After marrying at the age of nineteen, he led a quiet life with his wife and children up to twenty-five, when he saw his life change dramatically. Botindari’s sister, a young woman with a provocative beauty, was fought over by several young people of his native village of San Mauro. Among these some Cipriano Manzo, they asked for the hand, becoming the boyfriend “official”. The older brother of John, Mauro, was married to a certain Angela Pepe, whose brother, Francesco Pepe, was in turn in love with the sister of contention Botindari. After the discovery of a threatening letter on the balcony of the house at the bottom Botindari bearing warnings about the possibility, then not too hypothetical, with terrible repercussions on their family, if the marriage was celebrated with Manzo, followed by a series of other letters Mauro, outraged by the attempt to fire against the house by the Pepe, shot the wife of Vincenzo, the oldest of the Pepe, then giving himself to the bush in the nearby woods. Convinced by his brother John, in turn by the promises of the authorities that the offender would not have been tried, he returned to town, but was arrested and sentenced to three years. John protested and appealed to the Prosecutor of the King to Termini, but unheeded, he decided to take justice into their own, firing Vincenzo Pepe, because of the evils of his family, and then giving himself too literally on the run. Later in the letter public, he regret not having killed the Pepe in that circumstance. A series of brutal murders have for him and the “companion of snacks” Giuseppe Leonarda daily bread up to prison in 1895. La Banda Maurin, as presumably many other bands, did not live an official transfer of power, based on a dynastic principle or elective, but in typical brigands style: the law of the strongest, the most charismatic or simply the most dangerous, which was applied for the leadership of the band. Nor would it be to discard the hypothesis of several autonomous cells, which flowed under the name of Banda Maurina only on certain occasions, while others were continuing their criminal activities in small groups, originating in all or most, from San Mauro Castelverde.

A significant episode of one of these rendez – vous of Banda is surely the attack at the castle of Baron Spitalieri. This operation saw the participation of Botindari, Leonarda, Candino, Cavoli, Mazzotta, Giaconia, and Ortolano. During an excursion of the Baron and his son Felix, at a time of a place nearby where building a pipeline of water, Baron noticed the presence of armed men around them. He didn’t suspect that it could be robbers, did nothing, not even escape. He was asked if he were the Baron Spitalieri, and when they said yes was surrounded. Behind the promise that nothing would have happened if they had cooperated, father and son were reported to the castle and he asked for the release of the Baron, a ransom of 50,000 lire. Suddenly, as the robbers were busy in discussing about the request, the Baronello Felice managed to take a gun and burst into the room where his father was detained. One of the robbers, more accustomed to such circumstances, wounded him and then sought to smear the affront to liquidate immediately, killing him. It was at this point that the “chief” Candino, whose intention was not to allow that something might happen to the Baron, his son and wife, intervened. After a moment of rebellion in the rest of the gang, Candino exclaimed angrily: “Who today shed a single drop of human blood, will have to deal with me.” Undoubtedly, this shows clearly the hegemonic role of Candino who, with his words, sort the immediate effect of calming the soul. At the end, after payment of ransom and the release of Baron Spitalieri, the robbers apparently do not satisfy by the loot, they went into all the rooms of the castle, by subtracting the Baron have each, totaling about 300,000 lire. Parties having “plundered the plunder”, the Baron still shaken from happening noticed that one of them was coming back, he thought he had returned to kill them all, since there was nothing left to steal, and instead the general astonishment, he realized that the head of Banda Maurin, Melchiorre Candino, clicked back to return the gold watch of Baronello Felice said: “We do not take jewelry, is too compromising.” 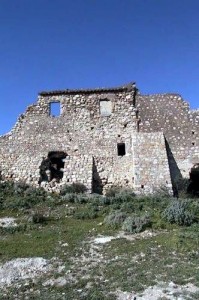 Lately the Botindari and Leonarda were recognized by Baron Spitalieri during the trial as the two who had stopped before the kidnapping, to make sure that it was indeed him. He was also asked how he managed to understand that the Candino was the leader and the Baron and he replied that “Candino was the only one with a silver chain attached to the gun, while all other strings of black silk.”

Botindari and Leonarda were sentenced to life imprisonment with hard labor, in isolation. The first found guilty of twenty-six separate and isolated crimes, while the second twenty-one. Meanwhile,the Candino, in the forest hermitage where he had fled, he saw the terror slowly disappear in the Madonie: the Banda Maurina.

(Thanks to Mrs Lita Abrami. She was a great help in translation)